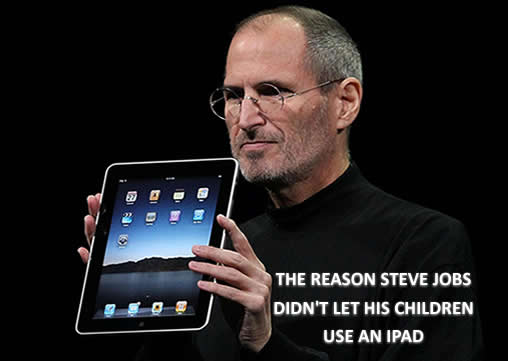 The success of devices like the iPod, iPad and iPhone made Steve Jobs a household name and earned him billions of dollars.

However, despite spending his life creating one of the world's biggest technology empires, he took a fairly strict view on gadgets when it came to his children.

New York University professor Adam Alter, author of "Irresistible: The Rise of Addictive Technology and the Business of Keeping Us Hooked," explains why Steve Jobs never let his kids use an iPad. Following is a transcript of the video.

Steve Jobs in 2010 was on the stage at the Apple event releasing the iPad and he described it as a wonderful device that brought you educational tools. It allowed you to surf the web, it allowed you to watch videos, it allowed you to interact with other people. And he basically said it’s the best way to do all those things.

Two years later when he was asked “Your kids must love the iPad?” He said “Actually we don’t allow the iPad in the home. We think it’s too dangerous for them in effect.” The reason why he said that was because he recognized just how addictive the iPad was as a vehicle for delivering things to people. That once you had the iPad in front of you, or when you took it away from the home with you, you’d always have access to these platforms that were very addictive. That were hard to resist.

So where his kids were very well adapted, well adjusted, may not have been prime targets for say substance abuse, they like everyone else, are susceptible to the charms of something like an iPad and what it delivers.

Using Address Lookup For The Benefit Of Your Business

Affiliate Marketing Advice That Will Make You A Superstar

The Real Meaning of Independence Day For Affiliate Marketers Like You

Is Launch Jacking A Suitable Method For New Affiliate Marketers?

How Do You Choose an Affiliate Program?