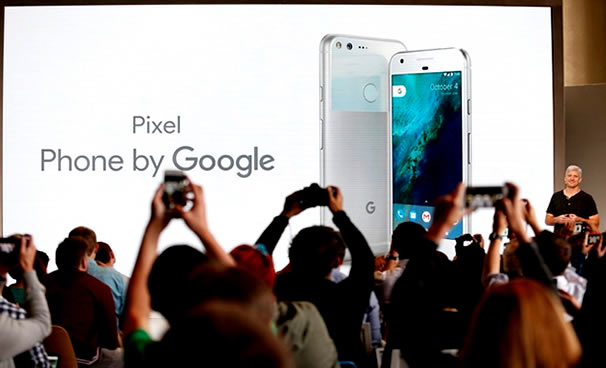 Google on Wednesday unveiled a redesigned version of its Pixel smartphone, part of a refreshed line of devices as part of the tech giant’s efforts to boost its presence against hardware rivals.

The new Pixel 2 and larger Pixel 2 XL are the first Google-made devices since Google announced the acquisition of key segments of Taiwan-based electronics group HTC.

The smartphones will be available for order as of Wednesday in six countries starting at $649 for Pixel 2, and $849 for Pixel 2 XL.

Google said the new aluminum-body smartphones as well as its newly unveiled connected speakers and laptop computer all aim to infuse artificial intelligence to make the devices more user-friendly.

“They’re simple to use and they anticipate your needs,” Osterloh told the product launch event in San Francisco.

“You interact with your devices naturally with your voice or by touching them.”

Google, by bringing in a team of engineers from HTC, aims to emulate the success of Apple iPhones by controlling the hardware as well as the software used in the premium-priced handsets.

Google also unveiled a slimmed down version of its digital assistant connected speaker starting at $49 in the United States, stepping up its challenge to market leader Amazon.

The new Google Home Mini is available for pre-order in the seven countries where the device is offered, and will go on sale in stores October 19, the company said.

The new speaker, which responds to voice commands using artificial intelligence, is less than half the price of Google’s first generation speaker and makes this “more accessible to more people,” said Google hardware designer Isabelle Olsson.

“We’ve been working hard continuing our shift from a mobile-first to an AI-first world,” he said.

“We are working on software and hardware together, because that is the best way to drive computing forward.”

The launch comes in the wake of Apple’s announcement of a new line of iPhones, and Amazon’s upgrades to its Echo speakers powered by its Alexa digital assistant.

Google also announced a new Pixelbook laptop, calling it a “high performance” computer powered by its Chrome operating system and designed as a rival to Microsoft’s Surface and Apple’s iPad Pro.

With a 12.3-inch display, the device is a convertible PC that can be used as a tablet and is sold starting at $999 for US customers.