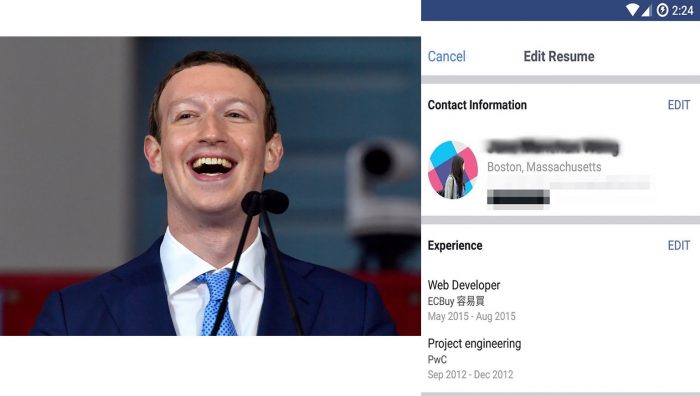 Facebook is currently trialing a resume feature, according to screenshots posted on social media — a move that would put it in direct competition with professional social network LinkedIn.

Matt Navarra, director of social media for The Next Web, has shared screenshots of the resume feature sent to him by web developer Jane Manchun Wong, who saw it appear on her Facebook profile.

The feature lets users list their professional experience and education, as well as their contact details, an image, and other information — just like Microsoft-owned LinkedIn does.

Of course, it's already possible for people to list their job history and education on Facebook. But do you really want prospective employers to see your private Facebook profile? Instead, the new feature appears to combine all the relevant information into a single, professional-looking package — away from personal photos, status updates, and other Facebook posts people might not wish to share with recruiters and the wider world.

It's not clear how many people currently have access to the resume feature, or what Facebook's ultimate intentions are here. The social network often tests features on a small number of users before rolling them out more widely (or not), and a spokesperson did not immediately respond to Business Insider's request for more information.

But just the fact that Facebook is experimenting with this is further evidence of how the Californian firm is increasingly trying to transcend its roots as a simple social network and move into the professional sector. In 2016, it launches Facebook At Work — now called Workplace — a modified version of Facebook designed for teams in the office to use.

Given Facebook's reputation for trying to crush potential rivals, that ought to make LinkedIn nervous.

Here's how it looks: